Though still a small and humble software company, PrintVis is growing and expanding as awareness of our print-specific MIS/ERP solution built on Microsoft Dynamics 365 Business Central grows rapidly across the graphics world. This week we are pleased to welcome five new members to our team, with a short introduction to each: Two new Developers, a Consultant, and two Junior Consultants – all ready to learn the ropes. 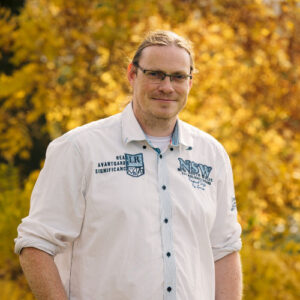 Mark has been working with Dynamics NAV/Business Central since 1997 and has pretty much experienced it all within that community. Although he doesn’t have prior experience in the print industry he does understand the aspects of manufacturing and is quickly learning the print vertical. From an ERP perspective, he has honed his skill set in logistics.

Mark says, “The reason I joined PrintVis is simple, I want to be with a successful cloud product while Microsoft is making this journey. I liked the team a lot when I met everyone in December 2019. In the last two or three years I’ve been learning a lot about Azure and serverless architecture – and with PrintVis I can take that to the next level.”

Together with his wife Mark has 5 children between the ages of 2 and 17, keeping them very busy. They reside in The Netherlands on a mini-farm with pigs, goats, sheep, chickens, rabbits and a mini-horse. He says his best friend is his dog, a white shepherd named Snuf that keeps him company in the office while working from home. For hobbies, he’s also a huge AFOL and spends a good bit of time tending to his collection. 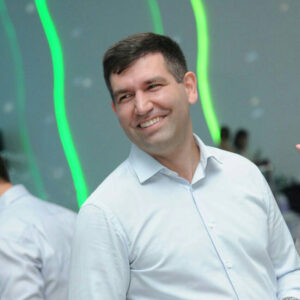 Stefan has been in the world of Microsoft Dynamics world for almost 8 years now. With his strong technical background, he will be an integral part of our core development team. He’s always looking for new challenges, and sees PrintVis as a perfect match, where he can share his knowledge and also to learn a great deal from colleagues who have over 20 years in the industry.

“A lot of work is waiting for us on our road to the new Cloud environment, and that is something that pushes us all to work harder and better.”

The PrintVis team includes people from multiple countries, and Stefan is impressed with how they work together; how they are kind and relaxed, especially during a time when we are all separated.

Married since 2015, he is a proud father of two beautiful girls aged two and five. Stefan is also a former handball player, based in Belgrade, Serbia – and his passion is sport. As such he loves to devote much of his free time to sporting activities.

Henrik has worked in the graphic industry for 30 years in a wide range of job roles, including print estimator, coordinator, purchasing manager, logistics manager and most recently as an IT project manager in connection with upgrading PV2009 to PV2016 – including integration to different webshops and 3rd-party systems such as Palette, Consignor and Apogee/Asanti (JDF).

Henrik brings his expansive knowledge of almost all parts of the graphic industry, digital, offset, large format, and post-press to the PrintVis team. For the last 4 years he’s been the in-house system administrator for PrintVis and the integrated webshops at the Danish print house Cool Gray A/S, and has decided it was time to try to put his experience to use as a PrintVis consultant.

He lives with his wife Maya in the small town of Jyllinge (40 km. West of Copenhagen) in Denmark. They have two grown daughters. Henrik spends much of his free time in their large garden, and plays hockey on a unicycle!  He’s also a volunteer assistant operations leader in the Roskilde Fire Department (a large city next to Jyllinge), and in the event of major incidents, assists the operations leader with communication and logistics tasks. 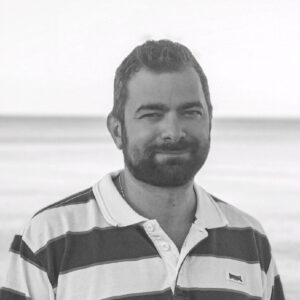 Born and raised in Romania, Ion is an alumnus of Aarhus University in Denmark, where he’s been living since 2009. He’s joined the PrintVis team under the auspices of his brother Catalin, who has been a Developer with us for several years now. He’s taken the path of a Consultant in search of a new career challenge.

Ion has been married since 2018 and recently became a father. He enjoys hikes in nature (“especially in the mountains”), as well as fishing and football. A primary passion for him is music, and he builds guitar pedals and guitars from guitar kits. 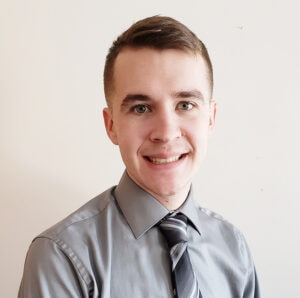 Currently residing in Meadville, Pennsylvania, USA,  Chris recently graduated from the University of Akron (in Akron, Ohio) with a bachelor’s degree in Biomedical Engineering and a minor in Business. Some of his prior work experience includes 8 years in customer service and even a dalliance in a steel manufacturing facility.

Chris arrives at PrintVis through his close friendship with Consultant Brandon Steele.  On his aspirations of officially achieving the position of Consultant, he says he wants to “deliver exceptional experiences to every partner and customer that I  interact with.”

In his free time, Chris enjoys playing soccer, volleyball, skiing, golfing and exploring the outdoors. He’s engaged to be married this July.